There many factors that go into semi-tractor aerodynamics and how to improve existing trucks to lower fuel consumption and cost.

The following article will outline in detail the various equipment and strategies a fleet can utilize to maximize miles per gallon.

Aerodynamic drag works against the vehicle’s propulsion at any speed above 0 mph <or kmph). The initial aerodynamics of a vehicle are established by the truck manufacturer with their base model. Base models that use a mid-roof design lose about 10% fuel economy when hauling dry vans or reefers due to the drag on the exposed portion of the trailer. A 10% increase in fuel consumption is equivalent to an annual operation cost increase of roughly $3000-$5000 per truck dependent upon the fuel prices to which the company has access to. The effect of mid-roof tractors on flatbeds is diminished from the standard enclosed trailers.

For the addition of every 1,000 pounds of weight, the fuel economy is diminished by about 0.5% (half-a-percent). This is important to consider when choosing between transmissions such as Detroit and Eaton which bear a several hundred-pound spread.

Existing Methods used by the OEMs in Tractor Aerodynamics

As mentioned previously, highway sleeper cab trucks are already optimized for aerodynamics from production and it is the addition or subtraction of these configurations that will affect fuel economy rates.

One of the OEM Factory installed aerodynamic configurations that you can find on your tractor is a bumper with air dam and rounded ends. This feature including the air dam reduce drag by deflecting air toward the ground and prevent air from sneaking beneath the trucks under-body.

Other features include hood designs which are sloped and curved. A-pillars and windshields are also rounded and curved. Aerodynamic roofs, rear roof extensions, wheel covers, gap fillings, chassis fairings, close-fitting fenders, and con-formal headlamps are additional features. There are several linehaul truck models that meet these specifications. Vehicles that have been optimized for aerodynamics have been classified as SmartWay Tractors in the United States by the Environmental Protection Agency.

Here is the list of class 8 truck models that have met the aerodynamic standards of the EPA for being a most aerodynamic truck :

The Volvo VNL series have just been introduced as a new line up so they haven’t officially made it onto the EPA’s list.

Even with the advent of fuel surcharge and fuel contract agreements, fuel expenses remain one of the top operating costs of all fleets, especially on the west-coast where the complexity of the regional geography and level of transport activity is significant.

Equipment for How to Improve Aerodynamics on Semi Truck

Between the steer and rear drive axles, truck manufacturers are presented with the task of fitting in several components such as semi-truck steps, air tanks, fuel tanks, battery boxes, and fenders. These parts that fill up the space between front and rear axles on the chassis create a tractor-trailer gap which increases aerodynamic wind drag.

The type of trailer and added configurations to the base model of a truck will take away from how the truck maker initially designed the tractor’s aerodynamics due to trailer gap.

Cab extenders also referred to as fairings are designed to restrict airflow from entering the trailer gap area. Crosswinds are a primary threat to tractors that do not have cab extenders because there is no protective equipment to deflect the air. Most truck manufacturers will pre-install cab fairings into their ‘SmartWay’ tractor models. Ideal cab extender design is one that has an outward slant that provides coverage for trailers that may be wider than the tractor.

Roof extenders are fairings equipped at the top of the cabin in order to compensate for differences in height between the tractor and trailer. Roof extenders are made specific to each model so that they do not take up space designed for the vertical exhaust or collide with the trailer during turns and dips.

A chassis fairing also called a chassis or fuel tank skirt is to provide a cover for the side of the tractor that displays truck parts such as the fuel tank and fenders. This cover helps eliminate wind drag and protects the tread of the tires. Tractor chassis fairings work best when there are skirts installed on the trailer. Chassis fairings are generally required for SmartWay semi-trucks. However, some fleet managers stray from using chassis skirts due to the weight addon as well as the extra maintenance requirements when accessing the chassis parts.

Drive wheel fairings are designed to streamline the flow of air around moving tires. They are one of the less expensive aerodynamic devices and can be purchased from FlowBelow. They also can help in improving visibility during wet conditions by preventing splash. 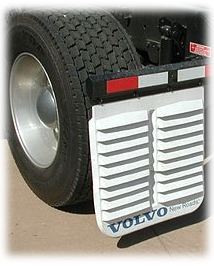 Vented mud flaps can be chosen as a configuration from the truck dealership but are also available as aftermarket parts. The fuel savings from vented mud flaps has not shown significant amounts from tests but they may give modest fuel consumption improvements during rainy conditions.

In conclusion, the integral step into developing an aerodynamic highway fleet is to select tractors that have already been designed for fuel efficiency by the OEM (original equipment manufacturer). A good way to do that is to look at the SmartWay Tractors listed by the EPA. After doing that, research the various aftermarket devices that may improve the aerodynamics of your truck(s). However, keep in mind that a class 8 truck consists of about some dozen-thousand connected components and if one major area is changed then the other areas may take some time to adjust to the altercation.

This guide is offered by TruckFreighter.com