What is an axle?

The axles transfer driving torque to the wheel. They must be able to withstand the weight of the commercial vehicle and any added cargo in the trailer. The axles allow the truck to carry more weight and assist in propelling the truck. A two rear-axle truck is commonly paired with a tandem axle trailer which can be identified with two pairs of wheels near the end and a kingpin at the front that connects to the hitch.

Axles are also responsible to locking in the wheels to the specific direction the other wheels are positioned in. The semi-truck axles are also called the drive axles.

The drive axles impact a truck’s ability to pull heavy loads, the speeds it can travel at, the overall fuel usage, and conclusively the company’s bottom line. 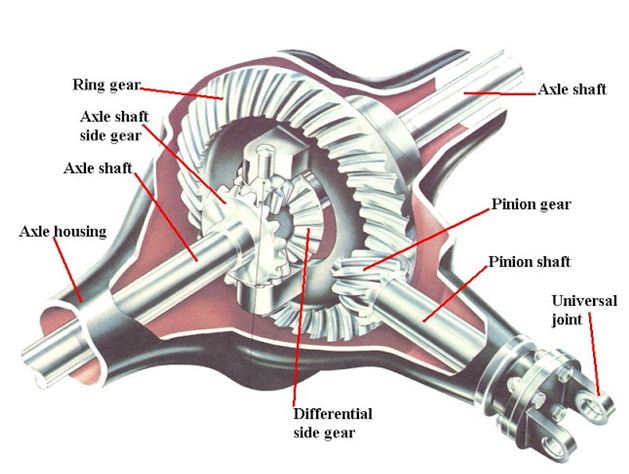 The basic metric to gauge to understand the affect a drive axle will have on your truck is the axle ratio. The axle ratio represents the comparison between the driveshaft which is a component responsible for transferring torque power and the drive axle rotations or revolutions. The axle ratio represents the relationship between the number of spikes on the ring gear of the tandem axles to the number of spikes on the pinion gear on the driveshaft. For example, a 3.78 ratio means there are 3.78 spikes on the ring gear for every 1 spike on the pinion gear. This means the driveshaft must turn 3.78 times to turn the axle wheels one entire cycle. In simple terms, the higher the ratio the greater the towing capacity but lower the speed and fuel economy. Medium duty trucks will require a lower semi-truck axle ratio while heavy-haul trucks will need one that is on the higher end of the scale.

Speed, Grade-ability, Load type and weight, Towing, Aerodynamics, Tire Size, Torque Converter are all factors to take into consideration when assessing which axle ratio will best fit your fleet whether that consists of only a few to a large number of trucks.

On-highway trucks will generally travel at significant speeds for long durations with consistent load weights. Therefore, it may be suitable for your truck(s) to have a axle ratio that strikes a balance between towing capacity and speed.

Gradeability is the truck’s ability to travel up a slope at a specific speed. For example, a truck with a grade ability of 10% at 80mph can maintain that level of speed for that gradeability level. If the route(s) your truck(s) take to transport goods have steep slopes then a higher ratio is required.

Majority of on-highway over-the-road trucks will have a relatively constant load weight throughout its journey. Therefore, you will want to assess the axle ratio to provides a strong balance while maintaining reasonable fuel efficiency rates.

Speaking in terms of towing capacity, you want to understand what percentage of the time your vehicle will be travelling at its gross vehicle weight rating (GVWR). For instance, does the transport of freight for your company mainly consist of LTL (Less-Than-Truckload) or TL (Truck-Load) If majority of the time the truck is at or close to its max GVWR then you will want to sacrifice some road speed for towing capacity and lean toward a higher ratio.

The smaller the tire circumference, the drive axle operates as if it was classified at a lower ratio compared to if the tire had a larger circumference. Therefore, smaller tires will increase the speeds at which the truck may travel at.

Most Common Tandem Axles for Semi-Trucks 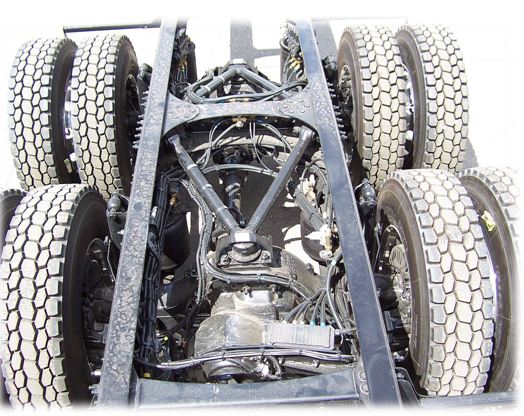 The main manufacturers of drive axles for semi-trucks are DANA, Hendrickson, Meritor, Mack, PACCAR, and Detroit
The 6X4 is the most common configuration for a drivetrain which consists of three drive axles delivering power to the wheels. There are also 6X2 tandem axle configurations in which power is only supplied to one rear axle in an attempt to reduce vehicle weight and increase fuel economy. However, there has been debate whether 6×2 drive axles are adept to heavy-duty applications.

The following table outlines some of the tandem drive axles available on the market:

The aforementioned provides a general introduction to semi truck axle ratios and their relationship to a tractor’s performance.