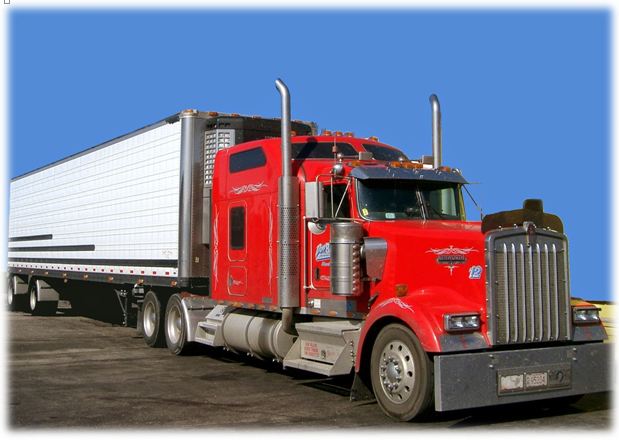 A semi-trailer-truck is categorized as a class 8 vehicle because of its gross vehicle weight rating (GVWR). Trucks that have a weight limit of 33,001 pounds are classified as class 8 trucks. These classes have been created by the Department of Transportation’s Federal Highway Administration (FHWA) in the United States. However, most countries also base the classification of commercial vehicles and trucks by gross vehicle weight rating (GVWR).

Some examples of common class 8 highway cab trucks include:

Each truck manufacturer builds and sells their own engines but also use engines from Cummins whom are a dedicated producer of engines and other power generation products including the diesel engine. The main component of a semi-tractor that is also the reason why it is called the power unit is the engine. Engines can be classified by fuel type, engine cycle, and type of ignition. In this article, the different types of semi-truck engines will be explored in order to determine the best semi truck engine.

With environmental conservation and fuel efficiency/costbecoming a greater issue in the industry, there are alternative engines used in heavy-duty trucks. Every year, a greater number of fleets are moving to using natural gas engines because fuel cost is significantly less than diesel or gasoline. However, a downside is that natural gas engines contain 20% less volume of energy compared to diesel engines which means truckers need to refuel more often.For example, 1.7 gallon of LNG is equivalent to 1 gallons of diesel and 3.8gallon of CNG is equivalent to 1 diesel gallon.

The way in which the fuel is stored determines whether the engine will run on compressed natural gas or liquified natural gas (propane). CNG are not adept for heavy-duty applications so they will not be covered here. Because LNG or Propane is less dense than diesel fuel, it does require a larger tank to store the same amount of energy. There are weight implications that will affect your trucks performance because diesel has the best weight-energy density ratio as opposed to propane. Also, LNG has a short shelf life of 7 days so it is mainly suitable for fleets that are constantly in motion and not idle for long durations.

The primary type of fuel found in truck power units is diesel. Once the ignition is started the cylinders are heated through the injecting of fuel at high pressures. A diesel engine requires spark plugs to start the combustion process.  Once the engine is heated to optimal levels, the accelerator must be pressed and the ignition turned to start the engine. Therefore, unlike gasolines engines, diesel engines only deliver fuel to the cylinders for it to burn upon the start of the ignition.

There are two types of diesel fuels, Diesel One and Diesel Two. Most diesel fuels come with a Cetane rating of 40-55.A Cetane rating is similar to how octane ratings relate to gasoline engines. Octane is the properties present in gasoline engines that prevent pre-ignition which can cause damage to the engine from occurring. Pure cetane has a rating of 100 and this level of cetane will produce a smooth-running engine but present drawbacks on fuel economy. Diesel fuel #1 or 1-D is more volatile with a higher cetane number so it is better suited for cold weather conditions.

For normal driving conditions, truckers rely on Diesel #2. Any fuel that can be injected into the combustion cylinders under pressure to create warm enough temperatures to complete combustion can be used in diesel engines. While a fractional distillate of petroleum fuel oil called petrol-dieselis the primary diesel fuel in use today, biodiesel, and even vegetable oils can be used. A diesel engine requires maintenance every 12,000 to 30,000 hours of operation or roughly 2,000 12-hour driving periods. There are also several smaller periodic maintenance procedures required.

Cummins Engines is strictly dedicated to manufacturing engines and their diesel engines can be found in all of the big Heavy-Duty Truck Brands including Freightliner, International, Kenworth, Mack, Peterbilt, Volvo, and Western Star. Cummins builds two types of diesel engines for heavy-duty trucks of which are the ISX15 and ISX12.

Cummins ISX15 manufacturing began in 2013 and is their latest engine for heavy-duty trucks. ISX15 generally boasts the best fuel economy amongst all sleeper cab diesel engines. The horsepower ranges from a minimum of 400 to a maximum of 600. The ISX15 is favored by the EPA and DOT. The 2013 ISX15 is equipped with On-Board Diagnostics to monitor and validate ideal fuel emissions system.

The following table outlines the brands and truck models which feature a Cummins ISX15 diesel engine:

The DD13 is best suited for LTL shipments, regional distribution, and for vocational purposes such as driver training. The horsepower to torque ratio is better in DD15 engines than DD13 mainly because when brake horsepower (BHP) exceeds 410, there is a sharp decline in torque lb.-ft. The longer the connecting rod is, the greater the depth of the cylinder and the greater the torque. Torque is calculated by multiplying the horsepower with 5252 / RPM.

Volvo is both a manufacturer of diesel truck engines and heavy-duty trucks. The main engines Volvo carries for its sleeper cabs is the D-13 and Cummins X15. The D13TC Turbo Compounding engineis suitable for long-haul operations requiring cruise speeds because it captures and harnesses energy that is lost through the exhaust. It also features a low fiction wave piston which increases friction and reduces emissions. Its power rating ranges from 375 to 500HP. The D13 Engine is featured in the Volvo VNL series in models such as 740 and 760.

The Mack MP8 engine is suitable for highway workloads. It is also adept for vocational purposes such as trucks used by truck driving schools. It has a decent horsepower range which is 415-505. The torque is 1460-1860 lb-ft. The new wave motion piston has boosted fuel efficiency by a couple of percent. However, the engine has showed issues with its fuel injectors. The MaxiCruise and Ecodyne are the ideal Mack MP8 variations for big rigs. The Mack MP8 engine is featured in the Mack Pinnacle Sleeper trucks.

Paccar is the parent company of Kenworth and Peterbilt. Both Kenworth and Peterbilt use Paccar engines and also feature Cummins engines as well. The MX-13 is Paccar’s most powerful engine for class 8 trucks. Its horsepower ranges between 405-510. The base warranty starts at 250,000 miles. The MX-11 can also be used for heavy duty applications but it is better suited for lighter loads such as LTL shipments.

Note: We did not review Navistar International engines because they are not recommended. If you are considering an International truck, the best we recommend is to buy one with a Cummins engine or upgrade to an engine manufactured by a different company.

Caterpillar (CAT) engines have been very favored amongst truckers due to its reliability but due to new emissions standards, CAT has discontinued making class 8 truck engines since 2010.

When choosing a heavy truck engine, it should also be kept in mind that buying an aftermarket engine is always an option, especially if you prefer features such as the transmission or aerodynamics in a particular truck brand. Adelman‘s carries aftermarket truck engines from most if not all major truck brands. However, it may increase support costs due to commonality issues with technicians and parts inventory depending on your maintenance service provider.

Fuel mileage will include assessing things such as storage tank weight, miles per gallon for your particular route, and fuel type.

Maintenance costs are important because they make up a decent percent of a truck’s operating costs. As a result, more common engines such as Cummins which are available by every truck manufacturer will have cheaper repair parts. Maintenance costs can also include the time it takes to fuel your truck because it knocks off hours of service on the driver’s logbook. Therefore, if you’re considering LNG vs Diesel then take this into consideration.

Hauling power of a truck is mainly dependent upon its torque and horsepower. Engine displacement is also a key consideration and heavier loads will be better suited to engines with a higher displacement.

Choosing the best heavy-duty truck engine will depend upon a number of factors unique to your situation and needs. The above information has outlined the key components to consider when choosing the right power unit but it is up to you to make the buying decision.

This website uses cookies to improve your experience while you navigate through the website. Out of these, the cookies that are categorized as necessary are stored on your browser as they are essential for the working of basic functionalities of the website. We also use third-party cookies that help us analyze and understand how you use this website. These cookies will be stored in your browser only with your consent. You also have the option to opt-out of these cookies. But opting out of some of these cookies may affect your browsing experience.
Necessary Always Enabled

Any cookies that may not be particularly necessary for the website to function and is used specifically to collect user personal data via analytics, ads, other embedded contents are termed as non-necessary cookies. It is mandatory to procure user consent prior to running these cookies on your website.