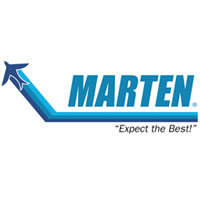 Read All Reviews
Write a Review


At Marten, you can expect the best. We strive to be the foremost provider of time and temperature sensitive transportation services.
Share
Share
Tweet
Pin
0 Shares

Marten Transport strives to be the premier supplier of time and temperature sensitive transportation and distribution services to customers in the United States, Canada and Mexico. We will accomplish this by exceeding the expectations of our customers, employees, stockholders and society. We serve customers with demanding delivery deadlines, as well as those who ship products requiring modern temperature controlled trailers to protect goods.

Roger Marten founded Marten Transport, Ltd. in 1946 at the age of 17, delivering milk and other dairy products. His routes at that time were primarily in the Modena, Wisconsin area where Roger was born and raised. Driving for the Modena Co-op Creamery, Roger purchased his first truck route with a $400 loan from his mother. In the 1950’s he expanded his milk delivery routes, purchased and drove school buses, and hauled petroleum products with his first tractor-trailer. In 1993 Marten suffered a tragic loss when Roger passed away. There are still many driving, office, and terminal employees working at Marten who were hired by Roger. Shortly after his passing, the Roger Marten Community Center was built in Mondovi, WI. The facility was dedicated to his memory in 1996.