The logistics and transportation industry is a very competitive industry in North America, more specifically in the United States. To demonstrate just how competitive it is, historically in 2015, consumers and business spending have gone up to an astounding USD 1.48 trillion generally representing eight percent of the US’ annual gross domestic product (GDP). Given that the US is one of the world’s most sophisticated and most influential economies it comes as no surprise that it has a highly developed network of an integrated supply chain that connects producers, retailers, and consumers.

Tailored logistics is key to successfully producing and moving goods around for sale thus tying up the profitability of a company to how efficient the business is at making sure their products reach the retailers and then to their customers. There are different logistic sub-sectors that companies can utilize to move their goods. The difference in load, distance, and cost all need to be carefully considered before selecting the type of transport services that is the right fit for the business. For domestic companies who move their goods locally will probably benefit most from utilizing transport services by land while overseas companies importing goods to the US will need more than just air transport but, in many cases, inter-modal logistics solutions.

There are multiple logistic sectors in the logistics and transportation industry. Understanding every one of them will bring advantage to a business. The familiarity of these transport services will undoubtedly save any reasonable business amount in cost, effort and time.

This sub-sector of the industry earned about USD 89 Billion in 2015. This is an essential part of the export infrastructure of this nation providing immense support to the supply chain. Companies would usually engage Air and Express Delivery Services when the need for speedy delivery is a priority. Generally, this type of service is utilized in delivering smaller parcels as well as highly valuable items. Businesses of small to medium scale are the ones who would regularly use this kind of service.

The US railway network has been used for so many years up to this day not only as for public transportation but also transporting goods. This is essential to the movement of the products over long distances throughout the continental US. The US railway network connects nodes over 140,000 miles of a stretch of land delivering more or less five million tons of goods on a daily basis. The railway is heavily relied upon by industries in wholesale, retail as well as the other sectors of the economy that are resource-based. One of the primary goods transported through the US railway network is coal of which accounts for about seventy percent of the total fuel supplied to the US. Other essential raw materials are carried thru the railway network includes fifty-eight percent of metal ores and agricultural products such as wheat and corn that totaled to a whopping 1.6 million carloads. Not only that, inter-modal trailers as well as inter-modal containers are transported through this logistic sub-sector and in 2015 it summed up to 13.7 million containers and trailers.

This sub-sector consists of the movement of goods by water. The means to transport the goods and even passengers include not only labor but also carriers, cargo ships, and ports. The US export industry has moved over 75 percent of all its export goods in the merchandise trade internationally via this logistic sub-sector. 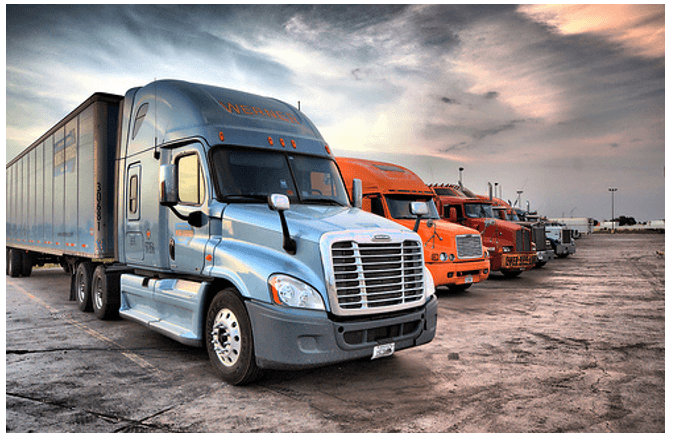 Both domestic and foreign companies who deliver their merchandise to their customers using Air and Express Delivery, as well as Maritime logistic sub-sectors inevitably, have to move the shipped products to Trucks as the goods need to be pushed further out to the retailers, wholesalers and then to the customers. Trucking is an indispensable tool in making end-to-end delivery possible. Without the trucking sub-sector, businesses and consumers alike who needs these goods will need to go out of their way to pick up the products from ports and other terminals then personally transport them back to wherever they are to sell them. That would be the ultimate mark of inconvenience. Gladly this no longer happens. The trucking logistic sector offers two types of services. This includes Less Than Truckload, also known as LTL, and Full Truckload or commonly known as FTL.

Currently, there is an uptick in the driver turnover this first quarter of 2018. The number shot up to 94%. For those of you who do not know what a turnover is, it is the rate employers recruit new employees to replace those who left. The industry faces scarcity of qualified drivers not because there is a shortage of their supply but because the market is becoming more and more competitive resulting to a hike in drivers’ salaries. Despite this, the industry continues to persist because the services offered by these transport services providers are indispensable to the supply chain to both local and international markets.

Since trucking is essential both to domestic and international movement of goods, let’s delve a little bit further into the choices we have in that industry. Now we will present a list of the top 10 trucking companies in North America.

Swift Trans started in 1966 founded by Jerry Moyes. Their network was then known as Common Market, and they focused their operations in the transport of steel delivered in seaports at Los Angeles utilizing routes in Arizona to Los Angeles and then the export of cotton from Arizona back to SoCal, Southern California.

Now, Swift Trans is one of the largest trucking service providers in continental US providing service not just to the US but also in Canada and Mexico. Proof of the company’s extensive network is its 40 primary terminals that are strategically located near freight centers as well as significant lanes of traffic. They have a fleet of 18,000 trucking units which allows them to be able to take a massive chunk in the US trucking market share that ranks them third for earning USD 4 billion for the calendar year 2016.

In 2015 Schneider earned, so it is one of the giants in logistics and transportation services in the US. They have been operating in this industry for eighty years now and has endured the test of time. At their disposal is a vast array of services that includes the following:

Schneider is a USD 4 billion worth company, and they will surely not disappoint if you so choose to work with them for your trucking needs.

JB Hunt Transport Services, Inc. is a logistics service powerhouse based off of Lowell, State of Arkansas. It was founded on August 1961 by Johnnie Bryan Hunt. The company has over fifty years of experience under its belt to boast that they have worked long enough in the logistics and shipping industry that they deserve a place in this top ten list.

For the calendar year 2016, JB Hunt has earned up to USD 6.6 billion in revenue and by proportion, considerably dominating the market. The services offered by JB Hunt includes the DCS or Dedicated Contract Services, Intermodal, Integrated Capacity Solutions, and Truckload. DCS is a customized set of the services provided to a company which is generally covered in long-term commitment contracts. Intermodal is when the railway network is used to transport goods via shipping containers and flat cars. Integrated Capacity Solutions are more commonly known as LTL and lastly FTL.

Landstar System is a light-asset carrier and provider of integrated transportation management solutions to customers around the globe. The company relies on a network of logistics agents and third-party owner-operator haulers to provide services across the globe.

In the R&P research list, Landstar System ranks fourth in the logistics and transport services, trucking subsector. Their gross revenue (USD 3.2 billion) in 2016 declined by about -4.6% compared to the prior year when their income was estimated at $3.3 billion.

Landstar is a logistics company based in Jacksonville, Florida. They cater to both local and international clientele. As many other logistics company, they too offer intermodal rail transport, expedited and emergency transport, LTL, FTL, Specialized and Heavy Stepdeck as well as temperature controlled transport of goods. Landstar prides their company with incomparable service because they have a unique system for global transportation that involves their 25,000 customers, local agents and 58,000 secure capacity providers ensuring that safety and timely delivery of goods.

It was in 1956 when Clarence Werner founded Werner Enterprises. They are a national organization headquartered in Omaha, Nebraska. Their global operations span links North America, South America, Asia, Australia, Europe, and Africa. In 2016 their gross earnings reached up to USD 2 billion showing a revenue decline of about negative four percent. Werner Enterprises offers logistics services such as dedicated solutions, integrated transportation management system (TMS) which is the most effective measure for mitigating the business cost. They also work on identifying the supply chain inefficiencies that lead to supply chain success and single source solutions that help global enterprises to have a comprehensive understanding of scalability and determine cost-effective ways to maximize your network in the supply chain among others.

Prime has in its arsenal varying modes to transport including tankers, flatbeds, temperature controlled transport vehicles as well as intermodal. The unique service they provide to the market that makes them stand out is that they allow their clients to lease vehicles aside from providing logistics and transport services. Prime had trailers that count up to 10, 000 and an annual $1.5 billion gross revenue in 2015.

It has been sixty years since the founding of CRST when they used to provide trucking services. Their business has evolved to be able to offer general logistics and transport services. At their disposal are 4,500 trucks. They provide similar services as that of the other relatively larger companies as well.

Crete Carrier was found in Crete, Nebraska in the year 1966. Since then the company has grown to become one of the major players in the logistics and transport services industry now has a fleet of 13,000 trailer units for their trucking service. Crete carrier now jointly works with Shaffer Trucking for temperature controlled transport and Hunt Transportation, Inc. for railway freight transport and all this is to enhance further their capacity to service more customers. Their expanded service made them a big fish in the pond racking up $1.01 billion in revenue for 2015.

Founded in 1991 by Kevin Knight, Knight Transportation has risen to the top ten logistics and transportation services providers list. The formerly family-owned business grew to become a multi-million dollar worth company in 2011. In just ten years, they were able to increase their revenue exponentially at a historic high of USD 850 million from $13 million. The increase in their revenue marked their proper management and expansion of operations. In 2016 they grossed $1.1 billion. The services they offer include intermodal transport, refrigerated, dry van, port and rail services, brokerage and other dedicated services.

Founded in 1986 by Patrick Quinn and Max Fuller, they started with a small operation with 48 truck units. Their success was not overnight, however, now US Xpress Enterprises play the big game. In 2015 they grossed USD 1.84 billion in revenue. They pride the company with the use of the youngest and most environmentally friendly fleets of transport vehicles. Their suite of services includes solo truckload, a team for urgent shipments, tailored logistic services for local and global transport as well as brokerage.

Whichever of these logistics and transport services providers you choose you are assured you’re in good hands.