Every fellow trucker needs to acknowledge the fact that semi-trucks heat up a lot of the time. They immediately need to be cooled down before they burn down your engine after a several-hour-long session driving through the highways and roads.

So, this article is all about cooling up your engine’s system. In the coolest way. 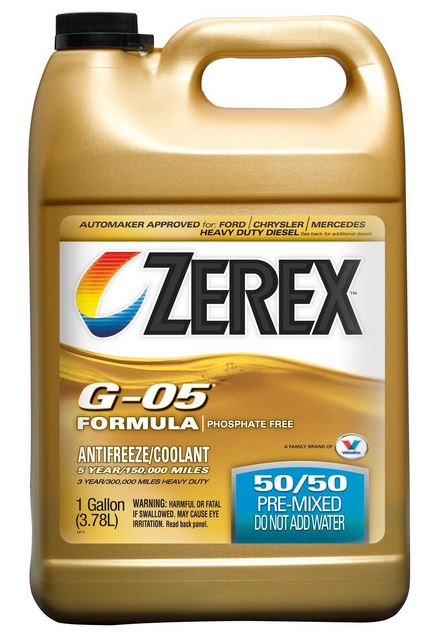 The Zerex G-05 is available in concentrated and ready-to-use options. It is suitable for and specifically made for, heavy duty diesel trucks. Unlike other brands such as Prestone, Zerex’s lower-silicate, reduced pH, phosphate free technology is geared towards semi-trucks. Some of the ways it protects your truck from damage and corrosion include:

Avoiding paying ridiculous costs for coolant at the truck stops and stock up by purchasing your anti-freeze online.

A survey depicts that a whole lot of vehicles around the world undergo heating issues on a regular basis.

Generally, an engine operates between 90 degrees to 105 degrees Celsius. Which is pretty warm for us but, for the truck? They’re built to withstand the heat. Not when they overheat. A big NO. Often happenings like these decrease the lifespan of the engine, and their work efficiency drops a lot, and they end up providing almost half the energy they need to.

When you are experiencing such a situation, you need to take necessary actions quickly. We recommend doing so because that would keep you away from replacing the engine altogether. Trust us; this saves a lot of money than shelling out on repairs for your truck.

There are tons of reasons behind overheating engines, which depicts the common factors and also the critical elements.

Let us explain it to you.

Generally overheating of engines for many of us is the result of too much driving. We have been given those “free advice” from various individuals that seemed to work at times, but other times it did not.

However, “over-driving” is not the only cause for “overheating.”

This article’s primary topic. Engine overheating can occur by various factors sub plotted in the coolant, like leakage, or not using the coolant at all can be one of the issues.

To get further details, we would suggest you go through the article properly for better understanding the reasons why we chose to help you with the best coolant for semi-trucks .

There would be a lot of valves on any truck. One such valve is called the thermostat.

When there is blockage of thermostat for extended hours, the engine might heat up in no time at all.

Chemical Reactions can ruin the engine.

An engine is mainly filled with gas. The truck’s engine system is complicated and has various solutions and solvents involved in it. During such period there is a high chance of an adverse chemical reaction that would essentially munch up the metal parts inside. Rust and corrosion can also be side-effects and an indication of improper chemical reactions.

Yes, this situation can be seen quite often, the reasons might be simple like not getting the truck serviced at the right time.

Trucking can be a lot of fun, traveling long distances, getting a view of natural landscapes. But that would also bring in a lot of possibilities like build-up in the radiator, which does not allow fundamental particles flow through the engine resulting in friction and hence a lot of heat is produced in the process.

Those were the most common reasons why an engine can overheat in less or no time at all.

All of the above problems can be overcome by taking necessary care and avoiding a few things.

So the main topic of this article is to share views of the best coolant for semi-trucks.

Let’s start with the radiator issue. A coolant can always be used to flush out the waste buildup in the radiator.

It is the easiest and the most efficient way to push out any unwanted stuff from the radiator that is causing the problem.

Next on the list is fan-failure. This issue can not be solved by the usage of a coolant. We would highly recommend seeing a mechanic in any such case. It may help you reduce the problem and also avoid inherent dangers.

Reactions can feed upon your truck’s core. Engines are prone to many chemical reactions that could result in rusting or metal wastage. Using a coolant is highly recommended here because generally refrigerants are inorganic which in other terms mean that they do not react to chemicals or empower chemical reactions. So nothing is going on in the engine except for the cleaning part.

As mentioned earlier, jamming can be easily solved with coolants that are specially designed to dissolve the debris or any waste material built up in the thermostat.

So these were the uses of coolants apart from cooling the engine.

Now let us mention some of the types of coolants that are being widely used in the current market.

It has picked up its popularity pretty recently and has replaced heavy water / distilled water altogether in many parts of the world.

Distilled water: Although being replaced by antifreeze, distilled water has been in use for almost a century now. In fact, they have been used from the time when heat engines started evolving.

Talking about air, It is not that useful for such heavy duty semi trucks.

But still, Hydrogen can be used as a coolant, due to its large specific heat capacity. Less mass and volume.

Sulfur Hexafluoride can also be used as a coolant, which is not recommended by us because of the efficiency. You can use it when you are out of your coolant stash.